We began our pilgrimage to Israel on a Sunday morning with a simple Eucharist service. Eucharist means “thanksgiving” I’m told, but in some churches is reference to a Communion service.

As I look around the church, I realised we were a mixed bunch. Some knew each other, while others were strangers. Some were Roman Catholic, and some Anglican, and still others claimed no faith at all. Yet we all jurneyed together, and would support one another throughout the week.

We travelled to London Heathrow, and were subject to understandably high levels of security on both sides of our flight. Touching down in Tel Aviv airport in the late evening, we then drove north to the city of Tiberius which was our base for the first part of the trip.

We awoke that first morning with a sense of excitement, and to views from our hotel of the Sea of Galilee.

During my first trip to Israel, the Sea of Galilee was a particular highlight and was again this time. We drove the short distance from our hotel and boarded a wooden boat – supposedly similar to that used by Jesus and His disciples 2,000 years ago. I suspect Peter’s fishing boat did not have a motor nor a sound system however!

Out in the middle of the lake… and it is a lake, not a sea as the name suggests, the engines were turned off and we had a few moments of quiet to take in the scene. While there has been some changes over the years, it is rather easy to imagine Jesus and His friends sat in a boat on these waters, looking out at the various shorelines.

Some places we would visit in the week to come would be memorials of things we read in the Bible. We cannot say with any certainty that things happened in some of the places where we remember them. However, this lake – this Sea of Galilee – was indeed the very waters where Christ was.

Jesus walked on this sea…

Immediately he made his disciples get into the boat, and go ahead to the other side, to Bethsaida, while he himself sent the multitude away. 46 After he had taken leave of them, he went up the mountain to pray.
47 When evening had come, the boat was in the middle of the sea, and he was alone on the land. 48 Seeing them distressed in rowing, for the wind was contrary to them, about the fourth watch of the night he came to them, walking on the sea

There was once a violent storm which rose up on this very sea, and Jesus calmed it…

On that day, when evening had come, he said to them, “Let’s go over to the other side.” 36 Leaving the multitude, they took him with them, even as he was, in the boat. Other small boats were also with him. 37 A big wind storm arose, and the waves beat into the boat, so much that the boat was already filled. 38 He himself was in the stern, asleep on the cushion, and they woke him up, and told him, “Teacher, don’t you care that we are dying?”

39 He awoke, and rebuked the wind, and said to the sea, “Peace! Be still!” The wind ceased, and there was a great calm. 40 He said to them, “Why are you so afraid? How is it that you have no faith?”

41 They were greatly afraid, and said to one another, “Who then is this, that even the wind and the sea obey him?”

The lake itself isn’t as large as you might imagine. In some respects, it’s difficult to think that such a huge storm could sweep down on to these tranquill waters. Yet to the noth, is a set of mountains and storms can swell and drop down on to the lake with little warning. I’m pleased to report it was calm and sunny while we were there!

What many fail to realise is that most of Jesus’ ministry actually took place in and around this area. When we think of Israel, we may think of Jerusalem, the Temple Mount and the sites of the Crucifixion or Resurrection. Most of Jesus’ ministry did not occur there, but rather further north in the vicinity of Galilee.

The feeding of the five thousand, the deliverance of Legion, the healing of the man lowered through the roof on a mat… all of these events took place in the north. Even after Jesus’ resurrection, He met them in Galilee. Peter and the disciples were fishing again, and Jesus met them on the shore.

Later that day, we drove around the lake to Merci Christi – meaning Table of Christ. This is the site, it is thought, where Jesus met His disciples after the Resurrection and had breakfast with Him.

That disciple therefore whom Jesus loved said to Peter, “It’s the Lord!”

So when Simon Peter heard that it was the Lord, he wrapped his coat around himself (for he was naked), and threw himself into the sea. 8 But the other disciples came in the little boat (for they were not far from the land, but about two hundred cubits away), dragging the net full of fish. 9 So when they got out on the land, they saw a fire of coals there, with fish and bread laid on it. 10 Jesus said to them, “Bring some of the fish which you have just caught.” 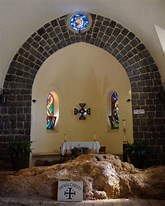 As you exit the chapel, you can turn left and go and sit on the beach. Is it the spot where Jesus and His disciples ate? Not sure, but could be. And for me, that’s the power of this place. We don’t know the exact spot of such things, but we know – for certain – that Jesus walked these shores.

Some sites we would later visit have almost been commercialised, and it can be hard to imagine Jesus in those places. Not here though, not in Galilee. This peaceful place, where you can sit on a beach and hear the lapping of the water, this place is one where Christ was.

Although the Sea of Galilee was a highlight for me, that in no way diminished the rest of the trip. Every place we visited was special in its own way, and should you ever find yourself in Israel, make a special effort to stop by tthe waters where Jesus walked.